Being "In the Closet"

Being "In the Closet" is when someone who is gay has yet to open up and tell significant people in their life about their sexual orientation. Typically, being and staying in the closet causes others to be uncertain of what the gay individual's sexual preference might be, though many will typically assume the person is heterosexual.

One of the thoughtless and cruel methods of bullying used among teens, as well as some immature adults, is to call someone gay simply if they exhibit what are stereotypically considered to be gay characteristics such as a guy being effeminate, or a girl who is strong and boyish. In such cases, the person being targeted may not actually be gay at all, though sometimes they are but may still be "closeted" around their family, or even to themselves, which makes such bullying particularly cruel and inhumane.

People stay in the closet when they don't feel that it's safe to be openly gay in their particular community or social environment. Unfortunately, one of the realities of the world is that if you are different from the main stream in any way, you are a potential target for the thoughtlessness and cruelty of others. However, such criticism can be diminished when you embrace that which makes you different, love yourself, and realize that you are unique... the only "you" on the entire planet!... as then it is easy to understand just how special beyond measure you truly are.

Even if you are in the closet, your being here right now, on this earth, is truly a miracle!

Despite the many ways that human beings are different from each other, or how illogical it is to expect every human being on the planet to be heterosexual, we unfortunately live in a predominately heterosexist society. As such, gay kids typically learn to be ashamed of who they are even though there is nothing wrong with them. This is one of the injustices or faults of Western culture.

The result is that later in life it takes time to accept being gay and make the first bold step of telling someone. The earlier in life that a gay person can come out, the better it will be for their present and future self. It's not healthy to stay in the closet and it also prevents you from getting on with life, having life experiences, finding a boyfriend, establishing a career, building friendships, and so on.

However, it goes without saying that all gay people do not have the exact same experience with coming out, accepting who they are, and then finding a partner. There's no formula or pattern that must be followed. Everyone is on their own journey and deserves the freedom of coming to terms with being gay in whatever amount of time they need. Variables such as a person's surroundings, the tolerance or intolerance of friends and family, and a person's physical location on the globe, all have an effect on how each of us muddles through it all. This is why some gay folks are able to be so openly gay and have a partner, while others living in the same city choose to be patient and give themselves more time before coming out.

Of course, one needs to be careful not to fall into the habit of using "being in the closet" as an excuse for not facing the uncomfortable task of coming out, as avoiding coming out can be unhealthy and detrimental to one's well being. Admittedly, I did just that for many years which I regret, so I am speaking from experience. You are only young once so coming out during your teens is ideal. But forcing someone to come out, or outing them against their wishes is wrong and cruel, no matter how good your intentions might be, as being outed only makes a person feel more powerless in a world that they already find overwhelming. I would also add that outing someone under the guise of "helping them" is a selfish thing to do as such an act is not about them but about you. Though you may think you are helping, what you are really doing is making their very personal situation about you, "the helper", rather than about them. If you really have a closeted person's best interests in mind, treat them as an adult and allow them the respect and dignity of being in control of their own life choices.

It must be up to the individual to make the choice one way or the other to come out, when they are ready.

Supporting someone who is gay by letting them be in control of when and where they will come out is the best thing that a friend can do. Simply being a shoulder to lean on and someone to talk to, to confide in, and to listen, is often more helpful than you might realize.

Rest assured, the injustice of shaming gay kids and the need for gay folks to come out later in life is slowly being eradicated by those who are companionate, forward thinkers regardless of their sexual preference. Gay kids today can take comfort in knowing that the laws protecting homosexuals exist as a result of homosexuals and heterosexuals working together to create an inclusive society.

Back to "Mikey's Coming Out Story" Main Page
https://mikeysfabulousgayblog.blogspot.ca/p/mikeys-coming-out-story.html

Back to Home page
https://mikeysfabulousgayblog.blogspot.ca/

Legal stuff:
Please post comments below or contact me through my website at www.artellepuppets.ca
The original contents of this blog including text and original photos are TM and © Mike Artelle, 1988, 2017
This excludes the pictures that were found online 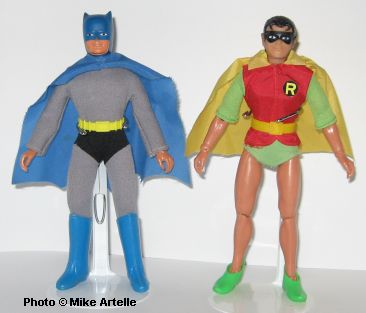 Mego Batman and Robin 8 inch dolls from my childhood.

Here's a news flash! Believe it or not playing with dolls does not make a child gay, nor does it "prove" that a child is gay! The Mego superhero dolls shown above were extremely popular in the 1970's, so much so that they were manufactured for a full decade, from 1972 to 1981. As such, almost every kid in my school played with these dolls, not just the kids who were gay. In fact, boys have been playing with these types of dolls since the 1960's and the toys are still very popular today, mostly among adult collectors who had them during their childhood. Therefore you really can't give gay kids from the 60's or 70's, like me, all the credit for supporting this multi-million dollar industry of "boys dolls" for the past 50 plus years.

Yet, even today in 2017 there is still a stigma about calling these toys "dolls" rather than the preferred term "action figures", as apparently the latter is more macho. It also allows folks to be in denial about the reality that the toy they like so much is in fact a doll. This desire to hide the truth is evidence enough that there is still a strong and false perception that "Boys shouldn't play with dolls", as it is considered in some way an indication of their masculinity and heterosexuality. Such thinking is a ridiculous and outdated concept, not unlike "A woman's place is in the kitchen".

I've posted more about Dolls for Boys on my doll blog, here: http://mikeysdolls.blogspot.ca/p/introduction.html 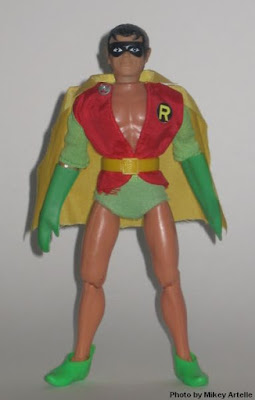 My buff little Robin doll showing off his hot little chest!
He's also wearing a tiny pair of removable green underwear with matching elf shoes
while showing off his bare legs, which certainly makes this one gay little doll!
No wonder Robin was my favourite!

The fact is, I would have been gay regardless of what types of toys I played with. Even at such a young age as six or seven I had an awareness of liking the male figure and a specific interest in boys. So in regards to my dolls, when I was in grade one I recall being very interested in the sculpted muscular chest on my Robin Mego doll (above), and liked how his shirt opened at the front to show him off. But my Robin doll didn't "make me gay" because I already was gay, even before my parents had bought the doll for me! And I was a selective gay kid, as I clearly preferred playing with Robin over Batman. Heck, at least my Robin doll permitted me to enjoy an innocent expression of my gayness as a child before the weight of the world would come crashing in on me as a gay teenager! 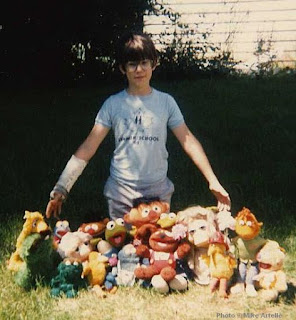 With my Muppet collection in the mid 1980's when I was about 10 years old.

I also remember as a kid, drawing a picture of the Incredible Hulk and thinking about how much fun it was to draw his pecks and muscles. Then in grade two, I remember being very interested in a boy in my glass. He had blond hair and for some odd reason one day he took his shirt off in class to reveal a white sleeveless undershirt. The teacher scolded him and told him to put his shirt back on right away, and I recall being quite fascinated while watching him. As far as I'm concerned, memories such as these are evidence enough to demonstrate that my gayness is indeed natural... aside from the other more obvious indications during my teens!

Next page: Being a gay teenager in the 80's and early 90's
https://mikeysfabulousgayblog.blogspot.ca/2017/08/being-gay-teenager-in-80s-and-early-90s.html

Back to "Mikey's Coming Out Story" Main Page
https://mikeysfabulousgayblog.blogspot.ca/p/mikeys-coming-out-story.html

Back to Home page
https://mikeysfabulousgayblog.blogspot.ca/

Legal stuff:
Please post comments below or contact me through my website at www.artellepuppets.ca
The original contents of this blog including text and original photos are TM and © Mikey Artelle, 1988, 2017